Design of a
visual book

Graduation project for my graphic design thesis. The brief was to redesign an existing no-sense novel in the form of a visual book.

This is the final project of the Laboratorio di Sintesi Finale, designed for my graduation. The purpose was to create a visual book from an existent one. In my case I had to redesign “The Dalkey Archive”, a novel by Flann O’Brien, Irish author of the first half of 20th century. The novel narrates the encounter between Mick, government employee, and De Selby, a scientist who created PMD (acronym of the Dublin Metropolitan Police), a substance capable of blocking time and destroy the Earth’s atmosphere. Mick tries to save the world and encounters different characters: Cobble, an English Jesuit, the phantom of St. Agoustine of Hippo and James Joyce, who wants to save the Catholic Church from the Holy Spirit.
There are many themes on this novel, like philosophy, physics, astronomy, but the teology is the main one. O’Brien came from a nazionalist and religious family, and his faith in Irish Catholicism was very hard. In his work, the author translated the oppression, the rigidity of his religion in a ironic and mocking way. So, I studied the symbology and the iconography of Irish Catholicism, and I came across the old Celtic gospels.
After this, I decided to explain the novel with a series of handmade illustrations based on the artistic language of the antique miniatures.
I realised twenty illustrations: each one shows the arguments of the related chapter and it develops vertically, like some miniatures. The format of the book is 14.5 cm x 24.5 cm: this is the format of one of the old Holy gospels, the Book of Durrow.
I chose the coptic stitch for the bookbinding (made by the talented Jasmine Mango): the wire that binds the booklets refers to the typical Celtic plots. The cover and the back are ermined with green fabric: it refers to the “Donegal Tweed”, a handwoven fabric of the Donegal county.

First, I drew the illustrations with graphite pencils and Staedtler pigment liner 0.05; then, I scanned each drawing and I associated it with a colour, which refers, symbolically or not, to the arguments of the related chapter.
Here’s a photo of the drawings and the finished illustrations: 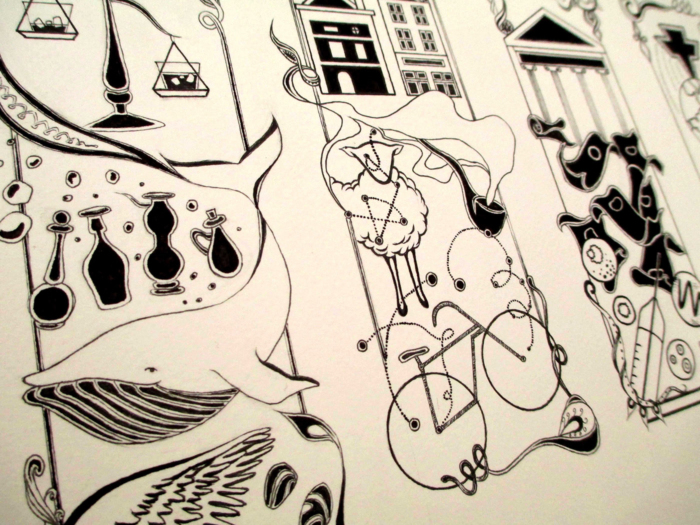 Here’s a sample of the layout, this is the chapter one:

And here’s some photos of the book: